Apple Creek fishing Report:  Apple Creek was stocked October 14, 2017 with ca. 450 good-sized rainbow and brown trout and on November 18 with ca. 300 rainbows and browns over a one mile stretch of Apple Creek.  Reports from fly anglers indicate trout are taking streamer patterns, nymphs and egg patterns.  Fishing has been especially good after water levels have dropped after heavy rainfalls, such as when the trout were stocked on November 18.  Look for fish in deep runs and pools.  Nearly all anglers are practicing catch and release.  If you observe anglers harvesting trout, please remind them that the fishery can be sustained only if everyone releases their catch. (reported by Skip Nault, 11/27/17).

The water has dropped and the water is very, very clear.  The trout are very spooky.  Some success has been reported with dry flies.  Might try a dry/dropper combination, 12/1/17.

Ice has formed over the slower moving areas of the stream, but some stretches remain with open and will fish when air temps exceed 32F.  That might not happen for a couple of weeks.  12/29/17.

Fished Apple Creek 1/11/18 after snow melt and air temps in the 50’s.  Plenty of shelf and thick surface ice over deeper and slower runs and holes making fly fishing almost impossible.  Lower stretch near Rt 30 exit with more open water, but no hookups.  Going to be cold and subfreezing after last evenings storm.  Another week or more before the Apple will fish (reported by Skip Nault).

Doug Hurt fished the creek on the afternoon of 1/25/18 and was the only fly fisher there.  The water was high and green in color.  He caught one big fat, 12″ rainbow on a small olive jig.  No other hookups.

Fishing report from Murphy Coan, 1/26/18 and 1/28/18.  Firstly, major props to the folks who organized the stocking this past fall, they sure put some high quality fish into the stream.

We haven’t spoken before, but I’d like to introduce myself, my name is Murphy Coan, I’m a forestry, fisheries, and wildlife student at OSU, as well as an avid fisherman and hunter.

I will have to say I was quite impressed with my 2nd and 3rd trip ever to the Apple.

Friday’s conditions were stellar to say the least.  It seemed that the rain that occurred earlier last week helped the water to pose a slight emerald stain and moderate flows (any trout fisherman’s dream).  With this being my second trip ever to the creek, I wasn’t expecting a ton of success, but thankfully I was proven horribly, and I mean horribly wrong.

My 1st – 4th drifts using a dull yellow single puffball egg pattern (size 14) yielded 4 hookups, 2 of which resulted in 16 inch rainbows.  I proceeded to stick with that egg pattern and was rewarded with another 11 fish over the course of an hour and a half allowing me to end the afternoon with 13 trout total ranging from 14-20 inches (all released happy and healthy).

Considering the stream was so productive on Friday, I had no option but to get back there as soon as a possibly could.

This round I took a pair of my buddies, neither of which had caught a rainbow on the fly.  The rain that happened between my trip Friday and our trip on Sunday raised the flows several inches and added a lot more stain to the river than I would have liked to see (something between tan and green).  Despite the less than desirable conditions, I managed to wrangle 8 rainbows, and my other buddies landed 3 and 4 (all 15 fish ranged between 14 and 18 inches, and were all released).  We were all throwing a variety of egg patterns in as bright of colors possible due to the muddy conditions, and the most productive pattern was a blaze orange puffball egg in size 14.

I cant begin to thank CFRTU enough for the awesome experience, and I will hopefully be back soon pending my school work load!  (cant send all of the pics, not enough room in the email) 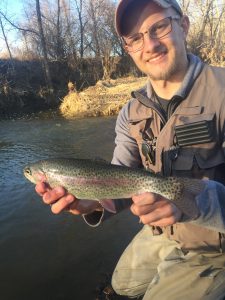 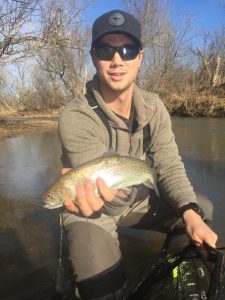 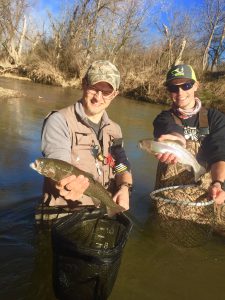 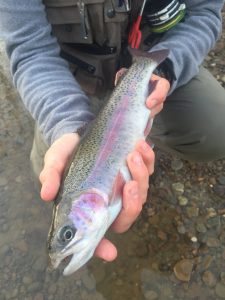 Report 2/1/18 by Skip Nault. Perfect day on Apple Creek with good water flow, 36F, visibility 20″ and a pretty green stain.  Had 17 hookups, landed 15, all rainbows, most 14-16 inchers.   Fish were in deeper runs and holes and all were good fighters (and jumpers).  Best flies were pink or yellow sucker spawn.  Another TU member on the stream has had three double digit catch and release days the last week.  Encountered two young kids with spin gear fishing with bait and 6 dead rainbows in a bucket.  I reminded them this is a “catch & release fishery.”  They promised not to harvest trout in the future or use baited hooks.

Forward fishing reports and related pictures to Skip Nault at bugmanosu@gmail.com. for posting on this website.

In 1998, the Walter Grosjean family donated 80 acres of undeveloped land bordering Rt 30 (E. Lincoln Way) to the city of Wooster for a park. The land is in a flood plain and cannot be developed for playgrounds, ball fields, etc. A one-mile stretch of Apple Creek runs through Grosjean Park. A wooded riparian zone borders the stream.

The Apple Creek watershed drains 55.2 square acres, all from Wayne County, and eventually flows into Killbuck Creek. Apple Creek is a freestone stream fed by numerous springs that keep the water cool during summer months and prevents the stream from completely freezing over during the coldest winter months. Heavy rainstorms overflow the banks of the stream and flood portions of Grosjean Park.

The section of Apple Creek that flows through the Park has never been channelized (straightened) and fallen timber never removed from the stream. Thus, the stream channel meanders through the Park. Fallen trees in the stream divert water in the gravel and sand streambed to form deep holes and runs providing excellent habitat for game fish.

Beginning in 2005, the CFRTU chapter teamed with the City of Wooster and the Ohio Division of Wildlife to create a trout fishery In Apple Creek. That year the stream was successfully stocked with about 1,000 rainbow trout. Since then, the stream has been stocked every year with rainbow and brown trout averaging 14-15 inches in length. Funds from the CFRTU chapter, the City of Wooster and grants from the DOW Outdoor Education program are used to purchase fish from a private fish hatchery in Castalia. The stream is stocked twice in the fall. Free fly-fishing clinics for novice and beginning fly anglers, which are taught by CFRTU members, are offered the same days as the stockings.

Stocked trout survive in the stream all year.   Although some trout attempt to reproduce in the creek, creating redds (clearing spawning gravel) and laying eggs, stream sediment smothers the eggs, thus survival of offspring is doubtful.

Each year, school kids participating in the TU Trout in the Classroom program, sponsored by the CFRTU, raise fingerling rainbow trout as a class project and introduce them into Apple Creek in May and June. Some of these fingerlings are known to survive and thrive in the creek.

The CFRTU chapter strongly encourages Catch & Release fishing in Apple Creek, and use of barbless flies and lures. We discourage bait fishing, as trout swallowing baited hooks frequently are injured and do not survive release back into the stream. These practices help to sustain the fish population in the creek year around for a greater number of anglers to enjoy.

The stream harbors a rich invertebrate fauna, especially small caddis flies and mayflies as well as midges that nourish the trout. The stream also hosts large populations of a number of minnow species that serve as trout prey.

Fly anglers will find success with small dry fly patterns such as the Adams or nymph patterns such as hares ear, pheasant tail, prince and the rainbow warrior. Various streamers, especially white or black wooly buggers are effective fishing patterns.  At times, egg patterns in orange or pink can be effective.

All anglers 16 years of age and older must possess a valid Ohio fishing license.

We also encourage anglers to report their fishing results to Skip Nault (bugmanosu@gmail.com). This information helps us to maintain and improve the fishery.  Also send digital pictures for the webmaster to post on this site.

There is no USGS monitor on the stream to measure water flow and temperature. After rainstorms, Apple Creek clears before the upper portion of the Clear Fork River. A map of Grosjean Park is provided and the stretch of the stream that is stocked is marked with a yellow line. Several trails from the parking lot take anglers to the stream. Anglers wearing hip boots, waders or wet wading can reach the entire stream. 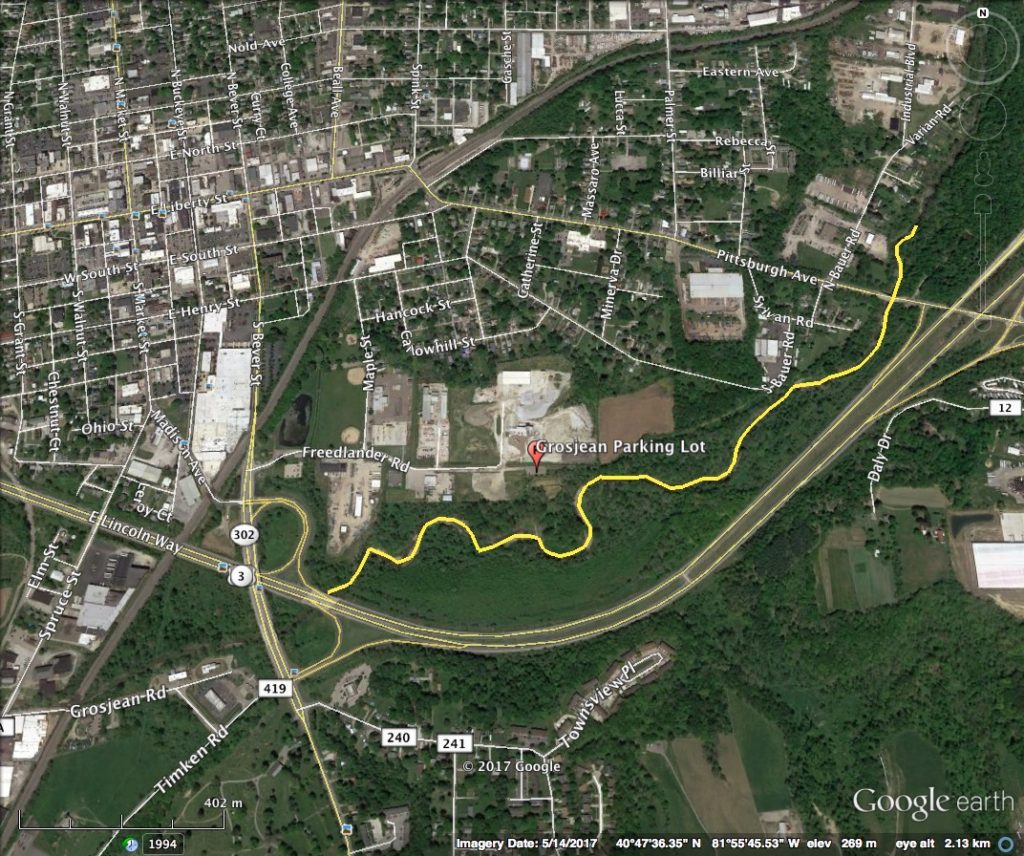 Note that E Lincoln Way is US 30.  Exit US 30 at the Madison Ave. exit and drive north a short distance to Freedlander Rd.  Take a right on Freelander and drive to the Grosjean Park parking lot.  The stretch of Apple Creek stocked with trout is highlighted in yellow. 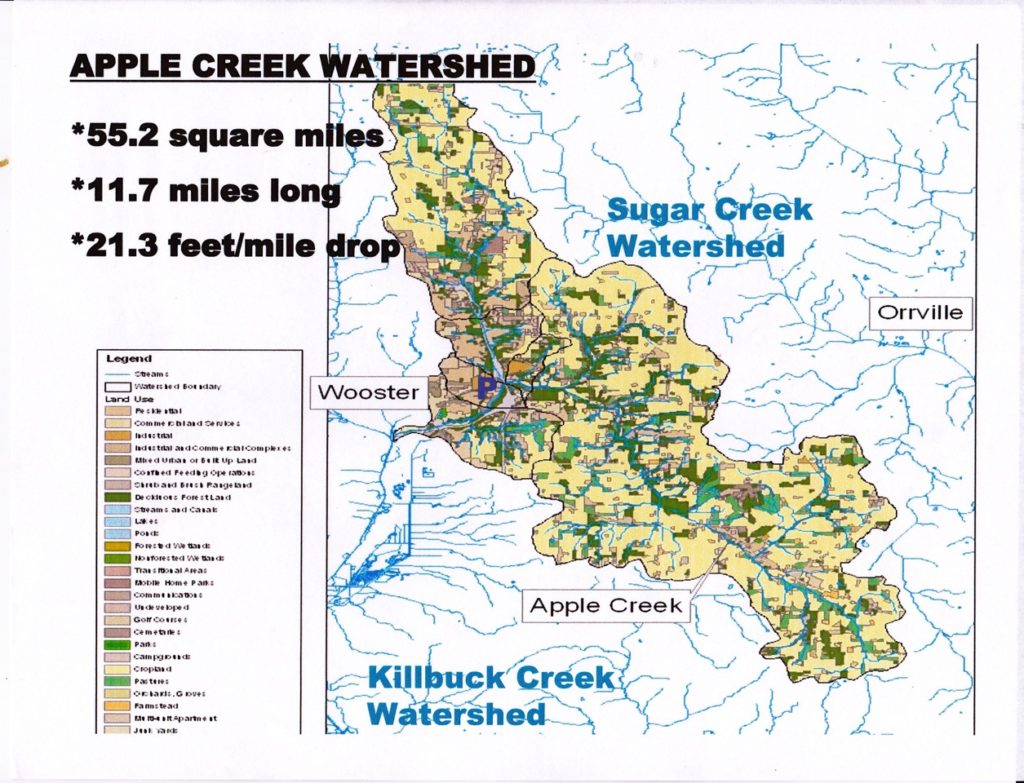 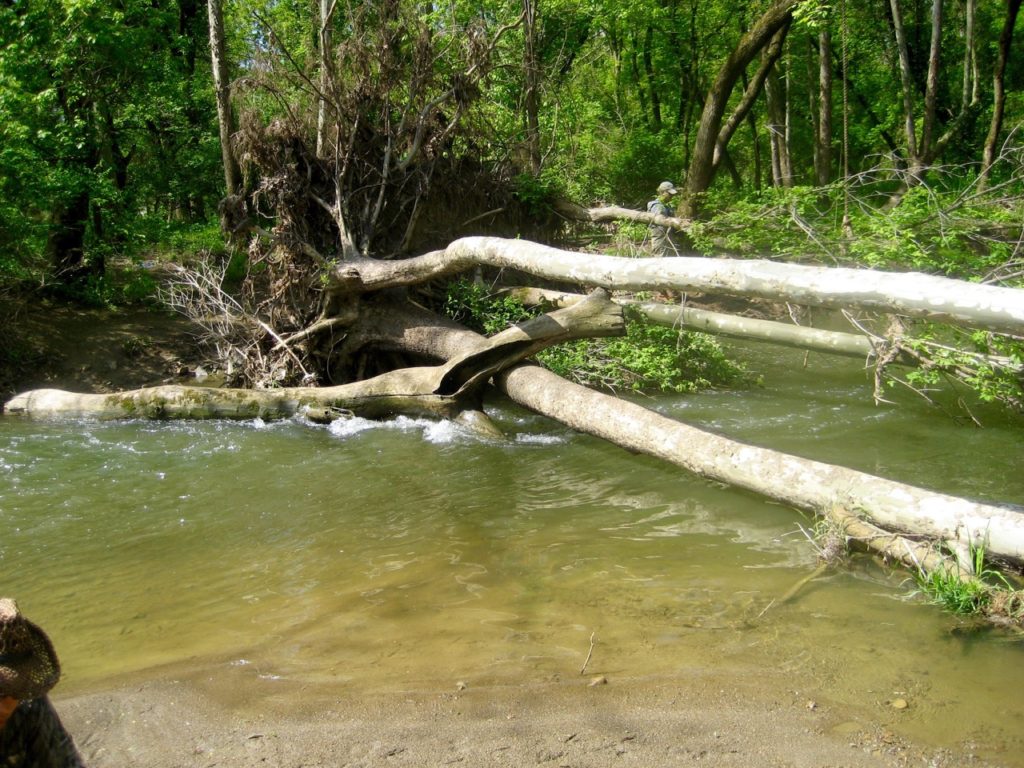