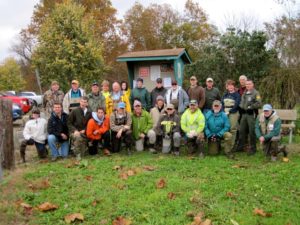 Two unrelated events provided the stimulus for establishing a trout fishery in Apple Creek. From 1992 to 1996 the Ohio Division of Wildlife (DOW), evaluated over three-dozen streams in Ohio for their potential as candidates to stock brown trout. Apple Creek rated as the third best stream in the state for the stocking program. Ultimately, the state stocked browns from state hatcheries in the two highest rated streams, Clear Creek in northern Hocking Co. and the Clear Fork River that flows through Richland and Ashland County, but not Apple Creek in Wayne Co.

In 1998, the Walter Grosjean family donated 80 acres to the City of Wooster to create a Park. The land includes a one-mile stretch of Apple Creek and bordering riparian zone. A portion of the land was once in agricultural production, but most of the land is woodlands surrounding the creek. The lower stretch of the park is flood plain, and cannot be developed. The stream has never been channeled and meanders through the park. Dead tree falls create deep pools and runs in the stream.

The Clear Fork River Chapter of Trout Unlimited approached the Parks and Recreation Department of the City of Wooster and suggested a partnership that would create a trout fishery open to the public in Grosjean Park. The stream was stocked with 600 rainbow trout in the spring of 2005. The program was a success, creating a trout fishery for dozens of anglers who visited the park that spring.

The stream was stocked again in the fall of 2005, and again excellent fishing was reported for the fall and winter of that year. The creek has been stocked with trout, mostly rainbows, and for a few years also with brown trout, twice a year ever since. The first six years the stream was stocked once in the spring and the fall, but the past five years the stream has not been stocked in the spring but twice in the fall. Stocking of Apple Creek is approved each year by the DOW.

Trout Unlimited asks anglers to practice catch and release and encourage fishers to use barbless artificial flies and lures. TU strongly urges anglers not use baited hooks that too frequently lodge deep in the fishs mouth, causing fatal injury. Sustainable practices such as catch and release and use of artificial flies and spinning lures are at the heart of the success of the Apple Creek fishery.

Funding for purchasing hatchery-raised trout has come from several sources. For the first seven years of the program, the City of Wooster provided over half of the funding. Trout Unlimited, as well as trout and fly fishing clubs from around the state and individuals donations provided the balance of funding. In 2012 a grant from the Ohio Division of Wildlife angler outreach program funded the first fall stocking; TU funded the second fall stocking. The City of Wooster continues to financially support the purchase of trout at a lower level, as well as providing much needed staff and equipment on stocking days. And of course, the City provides access to the park by the public.

Since 2005, over 9,000 trout have been stocked in Apple Creek at a cost of over $56,000. Larger trout have been stocked the past several years, averaging 2 pounds each, with some fish exceeding 20 inches in length. In addition, rainbow trout fingerlings have been introduced into the stream by schools engaged in TU’s Trout in the Classroom program.

The stocking of Apple Creek has proven to be one of TU’s most popular events. Chapter members, their family and friends are invited to participate. Stocking begins at 10 a.m. on Saturday mornings with the arrival of trout from Little Pickerel Creek Fish Farm in Castalia. The fish are removed from the holding tank and placed in buckets that are then carried by ATV’s and by hand to the stream where they are released into deep holes and runs throughout the stream. While the stocking is going on, trash is removed from the stream and surrounding area, bagged up, and hauled away. At the end of the morning, the creek is full of trout and a clean, inviting park is ready for sports men, women and kids who love to fish.

The past five years (2011-2015), the first of the two fall stockings have been coupled with a two-day clinic for adults and kids who want to learn to fly fish. The novices are paired up with experienced chapter members who volunteer to serve as gillies. Volunteers teach the basics of fly angling, how to cast a fly, fish a fly, hook and play the fish, and finally how to carefully handle and release the fish. The chapter has fly fishing tackle to loan participants who do not have their own. Over 160 beginning fly fishers have participated in the clinics the past five years. This program is financially supported, in part, by the Ohio Division of Wildlife.

TU conducted an on-line survey in 2010 of 100 anglers who fish Apple Creek. Nearly all who responded were fly fishers. Two-thirds of respondents were 50 years old or older and most, over 80%, were coming to fish Grosjean Park from outside Wayne County. The fishery is popular with anglers from the Akron- Canton area with substantial numbers of fly fishers also coming from as far away as Cleveland and Columbus. Seventy-five per cent of responders indicated that their fishing experience was good or excellent.

No plans have been made to improve the habitat of Apple Creek. The lower portion of Grosjean Park is flood plain and subject to periodic flooding. Tree falls and bank erosion are part of the natural system. The stream changes from time to time with flooding rains. When existing deep holes are filled-in, new ones always are created. The base flow of water in the stream comes from hundreds of cold springs that originate in the headwaters near the village of Apple Creek and throughout the watershed. The spring water cools the stream during hot summer months and warms the water during the cold winter months, providing year-round habitat for trout stocked in the stream.

The stream provides an abundance of forage for trout. A survey of fish species in Apple Creek in 2005 revealed large populations of Northern stone rollers, rainbow darters, striped shiners and creek chubs. Macro-invertebrate surveys conducted the past three years revealed numerous species of caddis flies, mayflies, stoneflies and midges, all of which are important items in the trout diet. During summer months, the surrounding wooded area provides terrestrial insect and other food items for trout.

The future of the Apple Creek trout fishery rests on its popularity with the fly fishing community who so far strongly supports the program. TU and the City will do all it can to sustain the fishery. That is why TU asks those who use the fishery to self report their fishing experience on the www.CFRTU.org website. This remains the best way to know how often the stream is fished and how well received the fishery is to Ohio’s anglers.