Each fall since 1992, the Ohio Division of Wildlife (DOW) has stocked the Clear Fork River with yearling brown trout in the fall of the year. Browns have been stocked in both the lower Clear Fork River below the Pleasant Hill dam in the Mohican State Park and in the upper Clear Fork River above the reservoir in the Butler and Bellville area (see map).

Recent studies by DOW fisheries biologists have shown that survival of brown trout in the section of the stream flowing through the Mohican State Park is very poor, with few fish reaching the legal harvestable size of 12-inches. Poor survival is attributed to the warm water released from the Pleasant Hill dam into the lower river. Starting in 2018, the DOW has been stocking the lower Clear Fork River in the Mohican State Park with harvestable-sized rainbow trout in the spring as a “put and take “ program (two fish may be harvested/day). Yearling browns are no longer be stocked in the Clear Fork River below Pleasant Hill Reservoir.

The DOW will continue to stock yearling brown trout in the upper Clear Fork River with 7,000 to 8,000 trout each fall. There are sufficient numbers of cold-water springs in the watershed to keep river temperatures beneath the lethal water temperature threshold of 75 F. The stream has an abundance of aquatic invertebrates that serve as a food source and holding structure for brown trout to thrive.

The 6 to 8-inch long yearling trout are released into the Clear Fork River at access points along bridges in the Butler-Bellville area. After 2.5 years in the river, brown trout grow to an average 12-inches. At this size, state fishing regulations allow anglers to harvest two trout per day. However, most fly fishers practice catch and release to sustain the fishery and allow for much larger browns to be caught in the future. While not common, browns over 20 inches and weighing several pounds are caught (and released) each year from the upper Clear Fork River (see pictures).

Most stretches of the upper Clear Fork River have not been channelized and are bordered by wooded riparian zones. Tree falls, boulders and rocks help create deep pools and runs, excellent habitat for trout and their aquatic insect and minnow prey. Terrestrial insects also provide food in the summer. A hatch chart (provided) gives fly fisherman guidance to what dry flies should be selected as well as nymph and emerger patterns to fish.

Most of the upper Clear Fork River flows through private property, and permission should be obtained before fishing, especially if the land is posted. Land bordering the river by the Wade & Gatton Nursery is open to the public as well as where the river flows through the municipalities of Butler and Bellville. Anglers using common courtesy and not littering will help keep these waters available to the public.  Place a Trout Unlimited sticker on your car window to let land owners know you are a TU member and responsible angler.

We encourage anglers to report their fishing experience to Skip Nault (submit fishing report). Not only will this help those planning to visit and fish the stream, but also we will report these results to the Ohio DOW. This will help them manage this excellent brown trout fishery.

Hatch Chart for aquatic insects on the Clear Fork River. 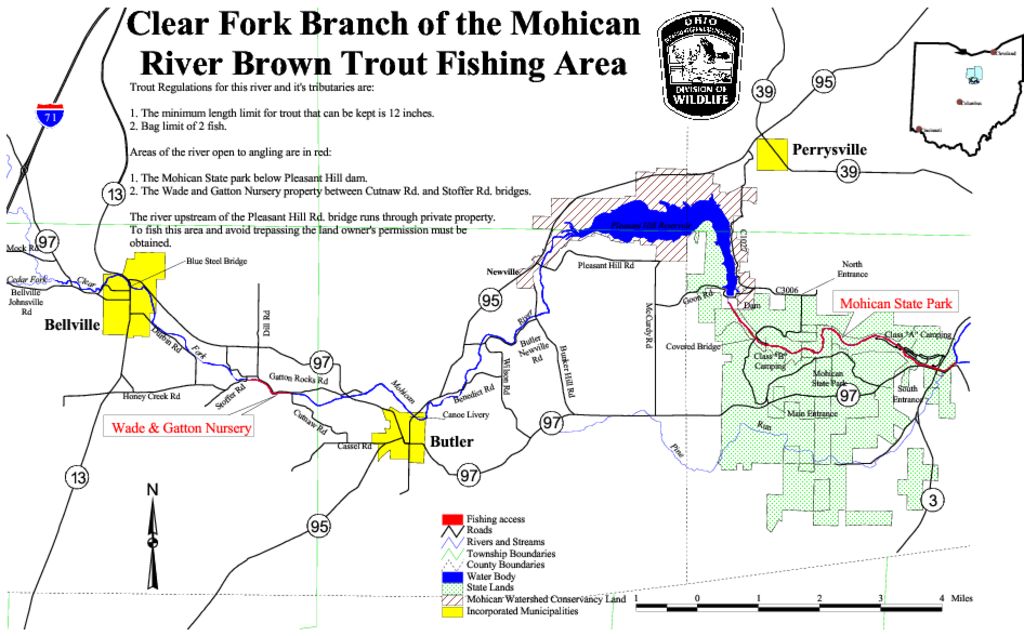